Economic Survey of Asia and the Far East 1952 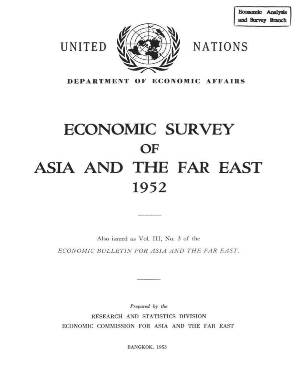 The Survey is published on the responsibility of the Secretariat and the views expressed in it should not be attributed to the Commission or to its member Governments.

The present Survey, while following more or less the same pattern of treatment as in earlier editions, is however confined mainly to the developments during the first half of the year, though subsequent developments have been noted wherever data are available. Because of the change in the date of publication, the present Survey is also being issued as Volume 3, No. 3, of the Economic Bulletin for Asia and the Far East. The statistical series and trade agreements as regularly published in the Bulletin are given at the end of this Survey and will be continued in future numbers of the Bulletin.