Economic and Social Survey of Asia and the Pacific 2008: Sustaining growth and sharing prosperity 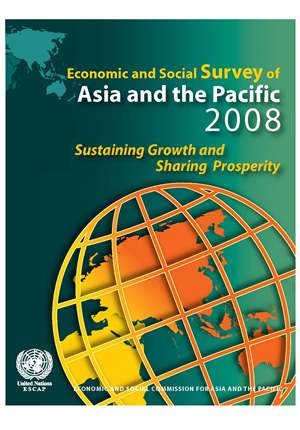 After the fastest growth in a decade in 2007, the developing economies of the Asia-Pacific region are expected to grow at a slightly slower but still robust 7.7% in 2008. The region’s developed economies are expected to grow at 1.6% in 2008, slipping from 2% in 2007. China and India, the region’s economic locomotives, are expected to continue growing briskly in 2008, boosting the rest of the region. Commodity and energy exporting countries, particularly the Russian Federation, are expected to add to the momentum. The major drags on performance are the slowdown in the United States driven by the bursting housing bubble, the unfolding credit crunch in the United States and Europe, the appreciation of currencies in the region against the dollar and the high oil and food prices.

Although exports may suffer from the slower growth in industrial countries, strong domestic demand driven by private consumption and investment in fast-growing countries and by fiscal accommodation should cushion the blow. Export-dependent economies in East and South-East Asia will see exports contribute less to growth, but China’s on-going expansion will continue to offer opportunities. North and Central Asia will continue to benefit from consumption and construction, thanks to income from high energy prices. With economies traditionally driven by domestic demand, South and South-West Asia will benefit from strong private consumption and investment and from expansionary fiscal policy in some countries. In the Pacific, Fiji and Tonga are expected to recover from economic contractions, while Papua New Guinea will enjoy rising consumption as the benefits of high commodity prices spill over to the rest of the economy.

The region’s resilience lies mainly in its healthy macroeconomic fundamentals, enabling countries to adopt supportive fiscal and monetary policies. Government budget deficits have gradually declined and, in some countries, have turned to surpluses. There have been no signs of excessive current account deficits, as in the prelude to 1997. Countries have reduced their dependence on bank financing, addressed currency mismatches and improved the health of banking sectors. Large foreign reserves have added to the region’s resilience.