Economic and Social Survey of Asia and the Pacific 1992 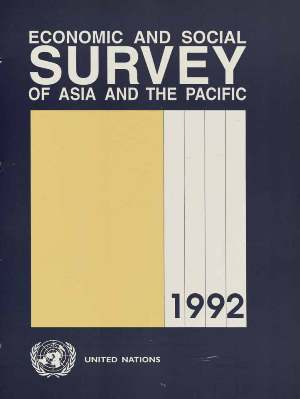 This is the forty-sixth issue of the Economic and Social Survey of Asia and the Pacific. It is divided into two parts, as in previous years. Part one analyses recent economic and social developments in the region; part two deals with expansion of investment and intraregional trade as a vehicle for enhancing regional economic cooperation and development in Asia and the Pacific.

There has been a steep decline in the growth of world output and trade during the early years of the 1990s. This unfavourable development in the international environment has been a significant cause of some deceleration of economic growth in the region. Nevertheless, the increasing strength of the domestic market, the rapid expansion of intraregional trade and investment, and flexible domestic policies have enabled the region to sustain remarkably high growth rates, though with considerable variation among countries.

Economic growth does not automatically bring about a socially optimal pattern of development. The objective of establishing such a pattern should be to ensure an improvement in the living standards and quality of life of all groups of the population, while ensuring adequate protection of the environment and the natural resource base to make the process of growth and development sustainable. The issues that feature prominently in this context are: achieving growth with stability; the alleviation of poverty; improvement in literacy, education, health and nutrition; and the preservation of environmental quality. Accordingly, the Survey devotes considerable attention to analysis of performance and policies with regard to these issues. Health and nutrition are singled out for especially detailed treatment in consideration of their significance as major determinants of socio-economic well-being. In addition, the vast ESCAP region encompasses many economies with severe structural handicaps – the least developed, land-locked and island economies and economies in transition. The particular problems confronting them and the related policy choices are also dealt with at some length.

There is increasing recognition of the imperatives of regional cooperation in a wide range of activities as a means not only to provide a further boost to the economic and social development of the region as a whole but also to enable the lagging economies to become more active participants in that process. The focus in part two of the Survey is on trade and investment – the two most significant forms of cross-border transactions – as instruments of strengthening regional cooperation and development. The intensity of intraregional trade and investment flows is analysed with particular attention to the evolving interrelationships between them. The potential of greater benefits from the intraregional trade investment nexus, in view of emerging complementarities among economies of the region, is examined; the constraints to a fuller realization of such potential are identified; and finally, policy options to overcome the constraints are suggested.

Owing to some unavoidable difficulties, part two could not be included in the present volume and will be published separately.

Like previous Surveys, this issue is published on the responsibility of the ESCAP secretariat and the views expressed do not necessarily reflect those of member and associate member Governments.