Economic and Social Survey of Asia and the Pacific 1989 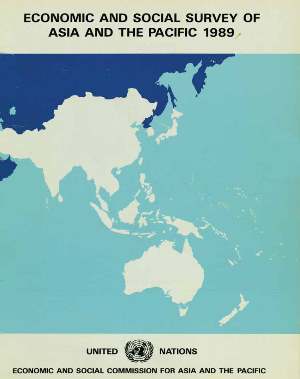 This is the forty-third Economic and Social Survey of Asia and the Pacific. Part one is devoted to an analysis of current economic and social developments in the region against the background of events in the world economy. Part two focuses on the serious problems of growth and transformation in the region’s least developed and Pacific
island developing economies in the context of the Commission’s continuing theme topic in 1990, “Restructuring the developing ESCAP economies in the 1990s.”

Most developing economies of the Asian and Pacific region traversed the 1980s with an unusually robust record of economic expansion in a decade that brought little cheer elsewhere in the third world. This was indicative of a remarkable resilience, that first became visible early in the decade, when a severe recessionary shock engulfed the
global economy but left most developing Asian and Pacific economies relatively unscathed. Moreover, this inherent dynamism was repeatedly demonstrated during the decade. In fact, through hard work, economic discipline and a strong determination to advance, many of these countries succeeded in turning their apparent misfortunes into fresh opportunities for continued growth.

This resilience and relatively strong ability to surmount increasing difficulties confronting all developing countries can easily be overestimated, however. The sharp brake on the growth momentum of the developing Asian and Pacific region evidenced by the fall of its average growth rate from 9 per cent in 1988 to 6 per cent last year, stemming largely from a slow-down in the region’s more dynamic economies, should dissuade any tendency towards exaggeration or complacency. As the Survey notes, this slow-down was partly the result of an inability to devote adequate resources to improving infrastructure, human resources, social conditions and protecting the environment during a period of rapid growth and continuing structural adjustment. It also reflected unrelenting protectionism and fiercer competition in world markets, both of which could become even more serious challenges for the region in the 1990s.

By far the most worrisome aspect of the region’s overall growth performance has been the extremely slow pace of development in the least developed and Pacific island economies, many of whose difficulties were compounded by natural disasters. Part two examines past and present structural problems confronting these countries and their prospects of overcoming them and joining the vibrant mainstream of Asian and Pacific development. This study bears directly on the Commission’s theme topic this year and complements the background paper, ESCAP(XLV)/INF.1, presented to the Commission at its forty-fifth session in 1989. While recognizing that the structural problems of these countries differ significantly from those besetting other developing countries in the region, the study finds considerable possibilities for their regeneration, though they would still need a strong supportive stance from the international community, including the region’s developed and other developing countries.

Like previous Surveys, which were titled Economic Survey of Asia and the Far East until 1974, this issue is published on the responsibility of the ESCAP secretariat, and the view expressed herein do not necessarily reflect those of member and associate member Governments.