Economic and Social Survey of Asia and the Pacific 1982 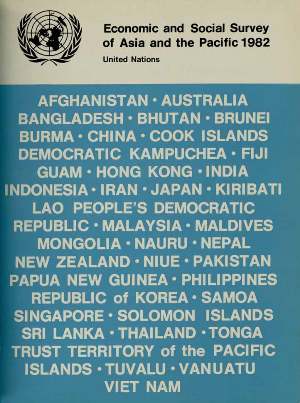 The worst recession in half a century has cast a shadow over the growth prospects of the developing countries of Asia and the Pacific. In 1981, many of these nations managed to maintain the tempo of economic progress, but 1982 brought a general slow-down in growth rates under the grim pressures of lingering recession, high interest rates and faltering export earnings because of slack demand and increasing protectionism in the industrialized countries. The impact was felt not only in widespread development cutbacks and mounting fiscal imbalances but also by millions of people as unemployment rose and hardships worsened for the region’s ragged legions of rural poor.

Growth prospects for the developing Asia-Pacific countries in 1983 did not appear to be promising. As this volume went to press early in the year, there were some signs that the world economy had neared or reached the bottom of its long slide, as indicated by declining inflation and interest rates in the United States of America. However, unemployment in the industrialized countries was widely forecast to remain high throughout 1983, as protectionist pressures likely would as well. There was also considerable doubt whether a global economic recovery, if it was indeed at hand, would be potent enough to fuel a full resurgence of growth rates in the developing world during 1983. As an in-depth analysis of the current situation, this volume forms a useful preliminary to the secretariat’s forthcoming major review and appraisal of the implementation of the International Development Strategy for the Third United Nations Development Decade.

This thirty-sixth annual Economic and Social Survey of Asia and the Pacific (until 1974 titled the Economic Survey of Asia and the Far East) pursues two closely related themes. Part One reviews recent economic and social developments in the region in the context of the present recession. Part Two examines the role of fiscal policy in development, a particularly important issue in the difficult economic circumstances of the developing ESCAP region today.

Like previous Surveys, this issue is published on the sole responsibility of the ESCAP secretariat. The views expressed are not, therefore, necessarily those of the Commission or the Governments of its members and associate members. Every effort has been made to ensure that the data herein are authoritative and up to date. While the review of developments is comprehensive until mid-1982, later information has been included to the extent possible up to year-end.