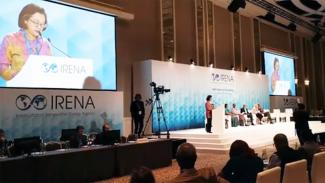 The Executive Secretary participated in the opening of the General Assembly on 11 January and was panelist in a ministerial session on renewables investment on 12 January. At the panel session, Ms. Alisjahbana noted that current efforts and policy actions in the Asia-Pacific region falls short of what’s needed to meet the targets of Sustainable Development Goal 7: Affordable and Clean Energy, and the Paris Agreement. She stressed the importance of understanding regional and subregional specificities as well as exploring technological solutions to address these challenges.

Ms. Alisjahbana also had engaging meetings with Mr. Fatih Birol, Executive Director of the International Energy Agency and Mr. Nick Dunlop, Secretary-General at Climate Parliament. They exchanged views on sustainable energy issues.
ESCAP and IRENA also signed a Memorandum of Understanding to promote renewables for energy transition, climate action and the Sustainable Development Goals. At the signing ceremony, Ms. Alisjahbana and IRENA Director-General Francesco La Camera reaffirmed the partnership between both organization and committed to further enhance renewable energy cooperation in Asia and the Pacific. 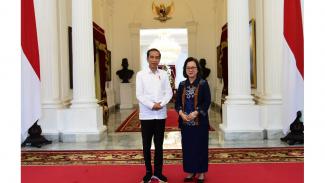 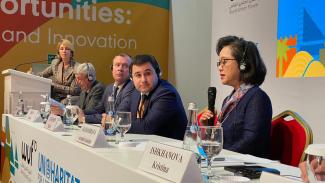