Senator Monthian Buntan has worked tirelessly over the last decade in the parliament of Thailand spearheading legislation to help persons with disabilities; managing to get policies passed that make it possible for them to pursue better education and career opportunities, access public infrastructure, while continuously striving to make information and communication technologies accessible to all.

The legislator has embodied this key role while being blind himself, since birth.

“It takes a lot of guts to break the barrier through legislative and administrative measures which block our opportunities to do whatever we want,” says Senator Monthian, one of a small but influential number of lawmakers in the Asia-Pacific region who have fought for the rights of persons with disabilities while having disabilities themselves. These legislators exemplify the growing numbers of persons who play an active and contributing role in dealing with the societal obstacles affecting their own lives.

“With the disability movement serving as backbone, as the foundation, we have been able to make changes to our legislation and we've been able to insert ourselves in the parliament, like myself,” he says.

The complete inclusion of persons with disabilities within society, through social and legislative measures, is part of the landmark Jakarta Declaration on the Asian and Pacific Decade of Persons with Disabilities, 2023-2032 adopted last year.

The High-level Intergovernmental Meeting on the Final Review of the Asian and Pacific Decade of Persons with Disabilities in October 2022 brought together government officials, representatives of PwD organizations from civil society as well as experts from United Nations agencies to review progress towards the Incheon Strategy - a set of 10 goals with accompanying targets and indicators, and further advance disability-inclusive development in the region.

This followed a 2017 midterm review in Beijing, which found the region falling short on its promises to implement concrete policy actions, fullfilling national PwD rights and limiting poverty in this community. The Jakarta meeting also served to spur greater commitment by governments to continue efforts in a fourth Decade to bring persons with disabilities into the mainstream, using innovations developed by persons with disabilities themselves along with encouraging more entrepreneurialism, but also strengthening education and infrastructure accessibility.

About one in six people in Asia and the Pacific, or some 700 million individuals, live with a disability. Yet, this number is likely an underestimation as only around 200 million are officially referenced in the region.

“The social expectation becomes reality when it has evolved to become a norm, which shapes how to put people with disabilities in certain places, certain educational settings or certain employment paths. By having a disability, even though you believe in yourself, even though you are fully capable of doing a lot of things: you are always going to be limited by social expectations,” says Yasuhiko Funago, a Japanese lawmaker living with amyotrophic lateral sclerosis (ALS, or Lou Gehrig’s disease). He is the first politician in Japan’s history, along with Eiko Kimura, with a severe disability to be elected to the Upper House of the Diet, in 2019.

His election was considered a monumental step for the country and the disability community, and Senator Funago has played a central role fighting for the inclusion of PwD by pushing forward disability employment quotas and accessible infrastructure in Japan.

“It is truly wrong to have this division between people with disabilities and without disabilities. Despite my rare disease, I am able to be an active member of the Senate. I am really working on realizing inclusive education and living in communities for persons with any disabilities, to improve the situation of PwD or persons with rare diseases,” says Senator Funago. “I am using my impairment as my strength.” 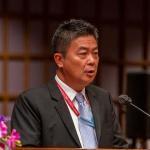