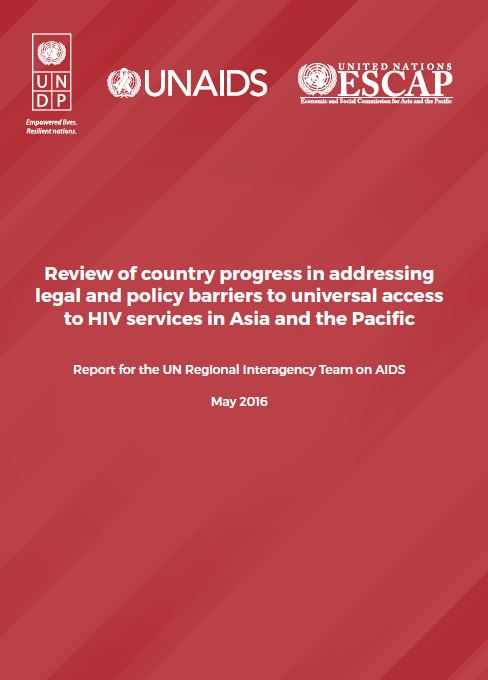 As part of the Regional Framework for Action on HIV and AIDS Beyond 2015 adopted at the intergovernmental meeting on HIV and AIDS in January 2015, a regional input on the progress made in addressing legal and policy barriers to HIV services is to be submitted to the United Nations General Assembly High-Level Meeting on Ending AIDS convened in New York, 8-10 June 2016. Towards that end, this report was commissioned for the United Nations Regional Interagency Team on AIDS. The purpose of this report is to highlight progress, challenges and future priorities in addressing legal and policy barriers to achieving universal access to HIV services in Asia and the Pacific.

At least 28 countries in Asia and the Pacific have conducted national legal and policy reviews of their HIV responses in the period 2012-2016. Most of these reviews were informed by extensive, participatory consultations engaging governments, civil society stakeholders, including people living with HIV and key populations, UN and development partners. The report draws from a desk review of data reported from countries on these reviews and consultations, and related developments in the legal and policy environment for HIV responses in Asia and the Pacific. The main sources of information for this report were survey responses received by UNESCAP, UNAIDS and UNDP from countries in the period 2014-2016, and country and regional reports of legal and policy reviews and consultations conducted since 2012. Based on this information, the report highlights significant examples of progress of countries in removing legal and policy barriers to accessing HIV services since 2012.

This report has informed country preparations for the United Nations General Assembly High-Level Meeting on Ending AIDS, and will inform subsequent actions at regional and country level towards ending AIDS, protecting human rights and achieving the Sustainable Development Goals.