‘Code red’ for region’s climate should increase focus on adaptation

As we inch closer to the 1.5°C target and beyond in this century, the sixth generation of CIMP6 climate models (known as Coupled Model Intercomparison Project 6) and the Shared Socio-economic Pathways Scenarios (SSPs) released by the Intergovernmental Panel on Climate Change (IPCC) Sixth Assessment Report in August 2021 shows that the global impacts of reaching 1.5 °C and beyond are far reaching. Combined with events like the COVID-19 pandemic, increasing uncertainties are being felt around the world. UN Secretary-General António Guterres called the Assessment Report a ‘code red’ for humanity.

The Asia-Pacific region is already encountering these impacts - where every fraction of a degree in warming translates into increased risks. Last year, India faced five cyclonic storms -- Cyclone Tauktae, Yaas, Gulaab, Shaheen and Jawad in the Bay of Bengal and the Arabian sea. Thailand, Myanmar and the Phillipines saw large scale flooding and typhoons. China’s Henan Province and the Russian Federation’s Volhzhsky district and Samara Oblast were all affected by severe flooding. Japan’s north-eastern region was hit by massive landslides triggered by rain in Atmai city. Combined with the worldwide pandemic, these disasters are illustrative of the new normal of cascading risks: a set of disasters intersecting and overlapping, thus creating cascading risks scenarios that exacerbate multiple critical vulnerabilities. These are set to increase under the new SSP scenarios and CIMP6 models.

How do these global climate parameters break down in the Asia-Pacific region? Using the CIMP6 models, ESCAP has downscaled the global warming trends to the Asia-Pacific region and its subregions under 1.5- and 2°C change for two time periods (2021-2040 and 2041-2060). Initial analysis shows that the intensity of weather events, especially heavy precipitation, agricultural drought, surface winds (known to increase tropical cyclones in oceans and sand and dust storms on land), and hot temperature extremes, is likely to increase in the region (Figure 1). The maximum precipitation in the region for example, will be four deviations above the global mean. These analytical trends mirror the newest climate change research seen in the region. 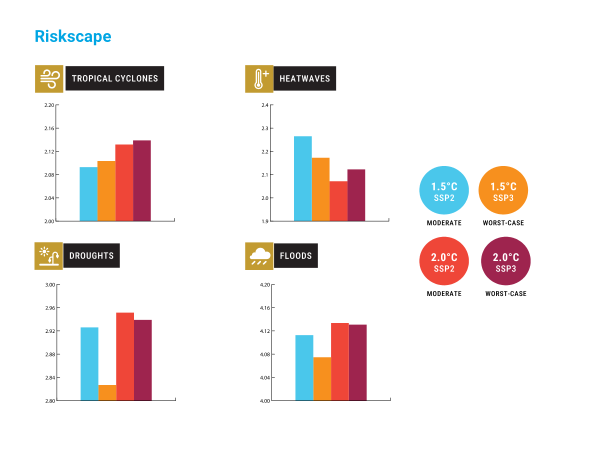 But the regional overview masks the subregional specificities. Each ESCAP subregion has a specific set of trends that will set the way forward for dealing with climate risks.

East and North-East Asia will be highly impacted by heavy precipitation followed by agricultural drought at  1.5°C. If the region moves to 2°C, it will be more impacted by high surface winds that will lead to more frequent and intense tropical cyclones for coastal regions and increased sand and dust storms inland. Extreme rainfall patterns are already emerging. For example, last July Zhengzhou China received more than a year’s worth of rain in one day .

The North and Central Asia subregion will be highly impacted by agricultural drought and extreme heat for all climate scenarios. At 2°C, the subregion will be increasingly exposed to stronger surface leading to increased sand and dust storms. Multiple sectors in this sub-region are already being impacted by potential climate change-driven water shortages.

The Pacific will be disproportionately impacted by surface winds leading to more frequent and intense tropical cyclones, especially as the region gets closer to 2°C. Cyclones Pam and Winston already fit the global pattern for cyclones of proportionately increasing category 4 and 5 cyclones.

In South-East Asia, a wetter climate seems to be emerging under 1.5°C scenario and will continue for a 2°C climate scenario as well. The subregion will also be impacted by more frequent tropical cyclones, especially under a  2°C climate scenario. In Thailand, for example, climate change has already begun to alter the pattern and intensity of rainfall.

The South and South-West subregion will simultaneously be impacted by extremes in precipitation and dry days, potentially leading to more flooding and increases in drought intensity and increasing cascading risks in one of the most vulnerable regions in the world - the Ganga Brahmaputra and Meghna Basin. In the past year, India already saw rising food prices from extreme weather systems.

These climate extremes will create new ecological openings for biological hazards as well. Tropical cyclones, sand and dust storms, floods, drought, and extreme heat can themselves create outbreaks of diseases such as malaria and dengue (floods, tropical cyclones), along with malnutrition (drought), heat syncope and heat strokes (extreme heat), and respiratory issues (sand and dust storms). To build resilience, therefore, implementing adaptation measures are an imperative.

The COP26 and the Glasgow Climate Pact highlight the significance of adaptation, particularly through setting new global targets for adaptation funding and highlighting elements that echoed the adaption priorities set by the Global Commission on Adaptation. These include strengthening early warning systems, making water and new infrastructure resilient, improving drylands to combat drought and desertification, and protecting mangroves to reduce coastal hazards. The ESCAP Risk and Resilience Portal shows that cost of investing in the key adaptation are a fraction of the economic losses incurred. The Portal also notes the key priorities for the subregions and countries for adaptation (Figure 2). Moving forward, to build resilience to global warming, the region must invest in these priorities in vulnerable areas where adaptation gaps are substantial to build resilience of people and their livelihoods.

Figure 2 Resilience pathways to adapt to 1.5◦C and 2◦C warming